The KD5 is a portable Netflix and Google certified Android streaming TV dongle. Additionally, the KD5 TV Stick is a certified streaming stick designed for cord cutters where all 1080p resolutions are sufficient. Also, the KD5 is for everyone who wants to turn an old Full HD TV into a Smart TV.

The KD5 Streaming TV Stick is powered by the Amlogic S805X2 SoC that supports 1080p@60fps HDR AV1 decoding. Plus, it supports Netflix, Prime Video, Disney+, and other popular streaming media. At present, there are not many devices on the market that can compete with KD5. The main competitor of the KD5 TV Stick is the Realme Smart TV Stick 2K. It has similar specs and a similar price.

The KD5 Android TV Stick is white and comes with a white Bluetooth voice remote. There is an LED on the front that lights up when the device is turned on. To connect a device, all you need is the HDMI port on your TV. The device can be powered directly from the USB TV. The device has only one micro USB (OTG) for power. Also, if you can't plug the joystick into an HDMI port, you can use the included HDMI extension cable.

First of all, KD5 is a typical streaming media player running on Android TV (Android TV 11). However, what sets it apart from other HDMI Sticks is that it is certified by Google and Netflix. Therefore, it is guaranteed that you can access Netflix Full HD without any application modification using the KD5 stick. You plug and play. The device supports 1080p @60Hz screen resolution. However, the resolution of the UI is 1280×720. The WiFi connection works great, is stable, and is fast. Wifi: Download - 193.6Mbps Upload - 153.3Mbps. Chromecast built-in works fine.

In addition to the Bluetooth remote with voice function (no problem to use), you can also use a gamepad (iPega PG-9076. Xbox controller). The KD5 Full HD Android TV Stick can also be used to play games from the Google Play Store (Simple Games) as well as in the cloud (Stadia, GeForce NOW). However, the device has only 1GB of RAM, and sometimes it doesn't run very fast. Inside, we also find only 8GB of eMMC storage. However, 8GB of storage can be expanded using an OTG cable. Additionally, KD5 can also be used with Plex and Kodi. If you need to control the KD5 from your smartphone. Just install the Google TV app from the Google Play store 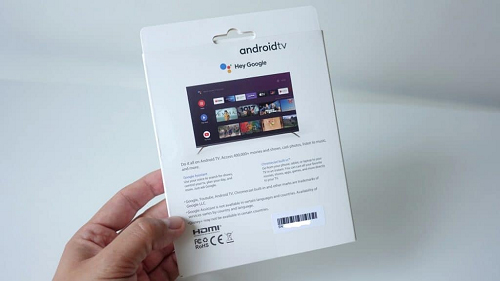 The KD5 Full HD Streaming Stick runs on Android TV 11. Kernel version 5.4.86. OTA updates are supported. As we mentioned, KD5 Android TV Stick is equipped with an Amlogic S805X2 quad-core ARM Cortex-A35 CPU processor up to 2.0GHz and GPU Mali-G31MP2.CPU speed is between 100MHz and 2.0GHz. The chipset supports AV1 decoding up to 1080p@60fps.

Except the device supports Google Widevine L1/Playready and CENC ClearKey. The device does not have root access.

Most of the current popular streaming services use the latest AV1 decoding. AV1 is a high-performance, royalty-free video codec that offers 20% higher compression efficiency and up to 30% bandwidth savings over HEVC/VP9 for the same image quality.

Besides online streaming, the KD5 Streaming Stick can also be used as a media player for local playback or via a NAS via Kodi 19.3 Matrix/Plex. The playback of Kodi 19.3 is almost smooth and stable. But AV1 samples work better on MX Player. Below is also a screen from a 1080p AV1 sample from Youtube. The device plays movies in resolutions of 480p, 720p, and 1080p (24fps, 30fps, 60fps) with various formats and codec videos such as AV1 codec, H.265/HEVC, and VP9. H.264. MPEG2. MPEG4. RMVB, and Audio – DTS and AC3.DTS HD/DTS/Dolby 5.1 passthrough works fine over HDMI.

For testing, we used an older version of Antutu Benchmark v8.3.4. GeekBench 4 and 3D Mark (one test). Benchmark results don't matter much, given the specs and the fact that the device plays streaming video correctly. That's why we didn't match 1080p devices with most 4K media players. But, for the curious, the screen below. Memory Benchmark (via A1SD Bench app): Read 96.77MB/s – Write 35.24MB/s. The RAM copy speed is 3571.93MB/s. Below is the benchmark screenshot.

The KD5 FHD Android TV Stick can easily stream 1080p HDR video content from Netflix, Youtube, Prime Video, Disney+, and more. The media player is also equipped with the Amlogic S805X2 chipset that supports the latest AV1 decoding. Although the Mi TV Stick (1080p) has been on the market for a long time, it does not support the AV1 codec. All in all, if you're looking for a certified Android TV Stick for your old Full HD TV, or if 1080p resolution is enough for you, we recommend the KD5 TV Stick.