Nvidia’s previous Shield TV was the king of Android TV boxes, but the new Shield TV Pro almost makes it look weedy. With the new Tegra X1+ processor onboard it’s 25% faster, while it boasts new AI-enhanced 4K upscaling that actually works, improving both the clarity of HD pictures and the vibrancy of colors for a 4K screen. The chip also handles real-time transcoding, so if you have a NAS drive full of files in different formats, you can stream them without a hitch. Throw in support for Dolby Vision HDR, Dolby Atmos and DTS-X surround sound, and it’s a regular AV powerhouse.

Running the official Google TV OS, you have access to all the software on the Google Play store. Plex is preinstalled and you can still install Kodi if you want to go beyond Netflix, Amazon Prime, Player, and the other usual suspects. And while the 16GB of onboard storage space is limiting, you can always upgrade it using a USB 3.0 external drive.

The Shield TV Pro’s other big selling point is games. Not only can the Tegra X1+ handle the biggest titles on the Google Play store, but it’ll stream games direct from Nvidia’s GeForce Now service, so you can play through your PC games library on your TV (provided the games in it are supported by the service). For some Kodi fans, it’s overkill and the new Shield TV “stick” may be more enticing – it runs the same software and has the same Tegra X1+ chip. All in all, though, this is the ultimate Android TV package. 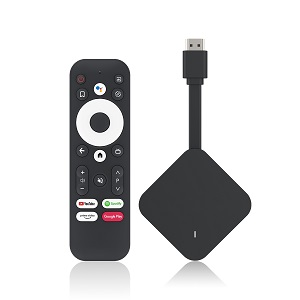 KD2 Android 11 TV Stick is small enough to easily fit in your pocket Forget about cables, plug the stick into any TV with an HDMI port to turn it into a smart TV; No more typing. Press the mic button on your remote to quickly find what you're looking for, whether you're searching for your favorite show, song, or asking about the weather

It Features the latest 4K HRD technology and high-speed 4K processing for up to 60fps playback. Enjoy an ultra-high-definition, the lifelike viewing experience; With built-in Chromecast, you can easily cast videos and other content from your phone, tablet, or laptop directly to your TV screen

Okay, it’s a stick, not a box and it doesn’t look like it's running Android, but underneath Amazon’s custom Fire TV interface you’ll still find Google’s operating system, and there are streaming applications such as Plex on Amazon’s app store. The same can’t be said of Kodi, but there are ways to download and install it and a range of other TV-friendly apps via sideloading or specific downloader apps.

The entry-level Fire TV stick will do a lot, but with just 1GB of RAM, a quad-core CPU, and 8GB of storage, it can feel underpowered. In terms of hardware and software, the 2021 firestick is identical to its predecessor - the only difference is that the 2021 model has a slightly updated remotely with a Channel Guide button and four app buttons that instantly take you to apps such as Amazon Prime or Netflix (the specific apps vary region to region). If you’re more of a Kodi enthusiast, you might want to find the extra for the 4K version, which has a faster CPU and 1.5GB of RAM – not to mention support for 4K video.

Amazon and eBay are stuffed with compact, cheap Android TV boxes built around the same 2GB of RAM and 16GB of flash storage specification. Most ship with an identical remote control and run a variant of the same reskinned Android software. This box from Easytone doesn’t do much to distinguish itself from the pack, but it’s reasonably speedy, stable, and easy to use.

The box itself is well-designed and surprisingly solid and while the remote has cheap-feeling buttons, they’re laid out more logically than they are on the remotes you get with some bargain-basement boxes. As with all these cheap Android TV products, you’ll need to sideload apps and may want to install your own version of Kodi but, with a few tweaks, this is an inexpensive way to get it up and running.

Xiaomi’s updated Android TV box isn’t perfect – it’s had some on/off issues with lag and stability – but it does a few things better than the average no-brand Android TV box. For a start, it runs the Google version of Android TV, meaning you get an interface designed from the ground up for use with remote control, plus a good range of apps from the Google Play store. For another, it has the Google Assistant and a remote with voice controls, meaning you can search for content or launch an app using voice alone – and it actually works. Until you’ve played with a few Android TV boxes, you won’t know how unusual this is.

The Mi Box S also has built-in Chromecast functions, so you can cast web pages and apps direct from your tablet or smartphone, although you’ll have to check that the box and your screen are on before you start as it won’t turn on your TV. What’s more, it’ll play 4K material from supporting apps. It’s not widely available in the UK and, at times, it can feel slightly underpowered, but if you want a cheap, no-nonsense alternative to the Shield TV, the Mi Box S is the only Android TV box that fits the bill.